In the lobby of a Blackpool hotel, one year after the end of the Great War, Britain's spymaster recruits a young sideshow fortune-teller for a mission of historic importance.

A standalone novella from the author of the Sebastian Becker novels The Kingdom of Bones, The Bedlam Detective, and The Authentic William James.

The New York Times: "The Kingdom of Bones... shows the occult mystery in its best light. Vividly set in England and America during the booming industrial era of the late 19th and early 20th centuries, this stylish thriller conjures a perfect demon to symbolize the age and its appetites… although Gallagher delivers horror with a grand melodramatic flourish, his storytelling skills are more subtly displayed in scenes of the provincial theaters, gentlemen’s sporting clubs and amusement parks where a now-vanished society once took its rough pleasures.”

The Sunday Times, London: "From its attention-grabbing opening, this period thriller moves back and forth in time to tell a compelling story of a man battling against what he believes to be demonic forces … [Gallagher] is brilliantly successful at evoking the shifting, transient world of travelling theatres and cheap carnivals that provide the backdrop to his twisting tale."

Ed Gorman: "He's an elegant stylist, a shrewd psychologist and a powerful storyteller with enormous range and depth. I finished his latest novel The Kingdom of Bones and I was honestly stunned by what he'd done. The sweep, the majesty, the grit, the grue, the great grief (and the underpinning of gallows humor from time to time). This is not only the finest novel I've read this year but the finest novel I've read in the past two or three years."

Kirkus Reviews: (for The Bedlam Detective, 100 Best Fiction selection for 2012) “Monsters, actual and metaphorical, are at the heart of this superbly crafted thriller. Gallagher loves character development but respects plotting enough to give it full measure. The result is that rare beast, a literary page turner.”

Jonny Lee Miller, via Twitter: "Just finished Stephen Gallagher’s The Bedlam Detective. Only bad thing about his books is that they eventually end. Brilliant."

New York Times: “Gallagher's detective is a man of fine character and strong principles, but he's upstaged by the monsters he pursues. Watching Becker track down a pedophile is gratifying, but it can't beat the sight of 20 overburdened boats hurtling through white-water rapids or Sir Owain, armed to the teeth and blasting away at giant serpents only he can see.”

The Historical Novel Society: “It’s certainly a thriller, but with a literary depth unusual in the genre, and fascinating in the complexity of its construct. Gallagher’s prose is swift, sure, and occasionally darkly comedic… Three words of advice: read this book.”

Stephen Volk: “It's a blinding novel (The Authentic William James)… each chapter had me chuckling with joy—if not at the acerbic wit, the brilliant dialogue—the sheer spot-on elegance of the writing: the plot turns, the pin sharp beats. Always authoritative and con-vincing, never showy. Magnificently realised characters in a living breathing world... Absolutely stunning.”

Publishers Weekly (starred): “British author Gallagher gives Sebastian Becker another puzzle worthy of his quirky sleuth’s acumen in his outstanding third pre-WWI mystery... Gallagher makes the most of his unusual concept in the service of a twisty but logical plot line.”

Stoker and World Fantasy Award nominee, winner of British Fantasy and International Horror Guild Awards for his short fiction, Stephen Gallagher has built a career both as a novelist and as a creator of primetime miniseries and episodic television. His fourteen novels include Valley of Lights, Down River, The Spirit Box, and Nightmare, With Angel.

Scroll down to see our titles, or see the menu for a list of links to each book's page. We're marking the publication of Anne Billson's superior ghost story The Ex . What began as an initiative to pimp my own backlist is expanding to become a curated selection of titles, some of them making their first appearance in paperback. Laurence Staig's The Companion was originally published in a YA list as Shapeshifter , and here makes its first appearance under its author's original choice of title and in his preferred version. Tim Lees' Frankenstein's Prescription was first available in a limited fine-edition run of 300 from Tartarus Press, and we're happy to offer its first mass-market edition. Stephen Laws' tower-block horror Darkfall is a recent addition to the list, now joined by the first UK publication of Ferocity . Also now released, the second paperback edition of The Authentic William James . The Brooligan Press is not open
Read more

Something is stalking the Northumberland moors, slaughtering sheep and other livestock. There have been sightings of a big cat, a huge, feral creature that has so far managed to elude capture. Some of the locals are terrified, while others scoff that it’s only a legend. Still, the killings continue. Cath Lane is a young novelist and mother, eager to explore her new home in rural Northumberland. To her the legendary beast of the moors is excellent fodder for a new novel. How could she know as she begins her research that the beast is no mere myth?  How could she foresee the terror that waits for her, crouching in the dark…? “Ferocity draws on horror’s history. I was particularly reminded of the style and worlds of Cornell Woolrich. Both Woolrich and Laws share engaging writing styles; incorporating the worlds of crime and horror. Stephen Laws’ prose generates suspense with exquisite simplicity” Horror Reader “This is a wonderfully involving and truly frightening tale that broug
Read more 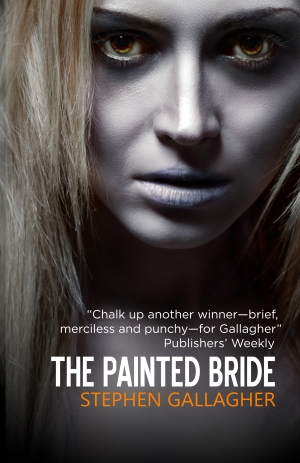 “Cold-blooded murders follow in the race to the climax. Chalk up another winner—brief, merciless and punchy—for Gallagher.” —Publishers’ Weekly "Stephen Gallagher’s tense melodrama is spun from the mysterious disappearance of auto dealer Frank Tanner’s wife Carol, the stalled police investigation into Frank’s possible guilt—and the complications ensuing from the obsessive actions of Carol’s burnt-out, former drug-taking younger sister Molly, who knows Frank did away with his wife, and devotes her dwindling energies to protecting the children now in his care and bringing him to justice"— The Washington Post      “If thriller reading were a sin, Stephen Gallagher would be responsible for my ultimate damnation. His work is fast-paced, well-written, infused with a sense of dark wonder, and altogether fresh.”—Dean R Koontz  “The finest British writer of bestselling popular fiction since le Carre.” —The Independent “Since Valley of Lights he has been refining his own bra
Read more